Looking Over The President's Shoulder 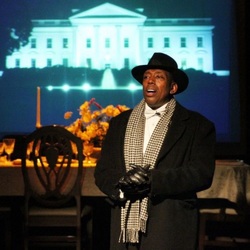 When Alonzo Fields accepted a job as a butler at the White House in 1931, his plan was to work there for the winter. That winter lasted 21 years. Based on the real-life story of the grandson of a freed slave who grew up in an all-black town in southern Indiana, Creer brings to life Fields’ story in this compelling play that takes Fields from giving up his dreams of becoming an opera singer to becoming Chief Butler at the White House.

Looking Over the President's Shoulder is told from the unique perspective of the Chief Butler who served four U.S. presidents and their families, from Hoover to Eisenhower. As Fields says in the play, written by James Still, "It was like being in the front row and watching the passing parade of history….”

"This one-man show is at once warm, thought-provoking and inspiring ... I cannot recommend this play strongly enough. It is a timeless story for all ages, a pure joy to see, and a story and performance you will remember long after the curtain falls." -TriCities.com

Performed live at Tabard Theatre, presented via multi-camera and live streamed directly to you in the comfort and safety of your own home. A link will be emailed to you two hours prior to the performance start time. The performance is approximately two hours, including one intermission.