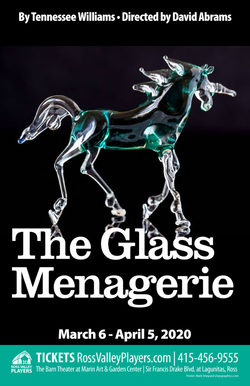 Ross Valley Players continues its 90th Season with "The Glass Menagerie." Tennessee Williams’ classic play set in the 1930s about a family’s financial and emotional struggles amid conflicting aspirations.

Williams pits a son’s desperate aspirations for a better and different life against his mother’s wistful nostalgia for her storied past and his sister’s debilitating shyness. Narrated by the son, Tom Wingfield who yearns to shed the yoke of his financial and filial responsibilities for a life far away. His sister, Laura, struggles to survive within his mother Amanda’s shadow of former antebellum popularity.

Tennessee Williams based his first successful play, "The Glass Menagerie," on biographical elements and characters and on his short story “Portrait of a Girl in Glasses.” Though "The Glass Menagerie" premiered in 1944 in Chicago, it moved to Broadway in 1945 propelled by two Chicago critics’ enthusiasm. In that same year, it won the New York Drama Critics’ Circle Award, which launched Williams’ career as a preeminent American playwright. The play’s poignant and painful story caught Hollywood’s interest and radio and television producers. Adaptations of the play enjoyed international success in Iran and India.

“I have always wanted to direct "The Glass Menagerie," it's one of my favorite plays," said David Abrams, director, "The Glass Menagerie. "I feel like my passion and my primary responsibility as a director are one: to open windows for the audience to see the beauty and dignity of all of the characters in the play.”

David Abrams Bio: David Abrams, the founding artistic director of Birdbath Theatres, is thrilled to direct with Ross Valley Players for the first time. His favorite North Bay roles include: Evan in The Aliens, Jean in Rhinoceros and Richard II with Birdbath Theatres. David recently directed Chekhov’s, Uncle Vanya with Birdbath and received a nomination for best direction by Theatre Bay Area. David teaches drama at several schools and programs around the Bay Area including The Oakland School for the Arts. David received his master’s degree in acting from the American Repertory Theatre at Harvard University.